Whipping up the sweetest ingredients for relationships and life

At the beginning of the summer I asked my hubby to think of one thing he would really want to do. Basically I told him to think of his ultimate dream date … within reason. I’m sure we’d all love to be whisked away to Italy for a romantic date night, but that’s not possible for us. LOL. I had to come up with mine as well. (I’ll be sharing that one later!!) He actually surprised me with his; he wanted a night away to Indianapolis! The two main reasons for Indy: 1. It has Howl at the Moon (my hubby’s all time favorite place for a fun night out!) 2. It’s not as busy and crowded as Chicago. It’s only about 2 hours from where we live so it’s the perfect one night getaway!

We packed the kiddos up and dropped them off at grandma and grandpa’s for the night. (Side note – can I get an amen for all the awesome grandparents out there?! We’d never be able to getaway like we do without them!) Once they were settled in we were off! We actually cherish our time in the car with one another. We didn’t have to listen to kids music or a movie playing in the background or have our 4 year old constantly ask questions in the middle of us trying to have a conversation! Plus we were able to get in some fun rounds of MadLibs ! 🙂

Once we arrived we dropped our bags off at the front desk of our hotel. We stayed at the Westin, which is one of our favorites to stay at. We then headed to lunch. I looked up some highly recommended places to eat with a fun atmosphere. Yard House was one of them and they did not disappoint. The food was delicious – their tacos are seriously amazing! The drinks were on point, too! They had a ton of beers on draft that my hubby enjoyed, and I found a new drink I love! So darn delicious!

After lunch, we headed to Punch Bowl Social for some good ol’ fashion game fun. They had pool tables, foosball, a couple old arcade games, bowling, and a few other fun games to play. The set up and atmosphere was so fun too. We had the BEST adult milkshakes there! Sooooo ahhhmazing! My hubby didn’t think he’d like it so we only ordered one (they were pricey). However, he kept sucking mine down they were that good! LOL

While heading back to our hotel there was a street festival going one. There seems to be something going on every weekend in Indy, especially May through September! We headed back to our hotel to officially check in and rest. The Westin has an indoor pool and jacuzzi tub that we may have took advantage of for a bit of relaxing before a little nap! Hello no kids … we can do whatever LOL! We showered and got ready for an evening out.

Next to Howl at the Moon in Indy there is a pizza place called, Hotbox. This pizza is so delicious and so cheap! Since the Indianapolis Howl at the Moon doesn’t serve food, they allowed us to bring in the pizza! We got there about 15 minutes after it opened because we didn’t reserve a table. The tables and seats go quick so we wanted to make sure we got one! If you have a group of people I would reserve one ahead of time. Once we grabbed a table, my hubby went to Hotbox, got the pizza, and brought it back while I ordered us some drinks! Now if you have a group, the buckets are so worth it!! They have amazing flavors, but the Pink Paradise is my all time favorite! We were able to eat our pizza, listen to amazing music, drinks delicious drinks, and dance the night away. I went on stage a few times – I didn’t care who saw. LOL It was such a fun night out just the two of us!

Afterwards while walking back to our hotel my hubby really wanted a hot fudge sundae. We stopped at a Steak N Shake on the way. We ordered one to share, but the waitress forgot all about us. We were ok, but she insisted on giving us two for one which was sweet. It was a delicious way to end the night!

The next morning we slept in until a little after 8! Woot woot! After checking out we headed to Milktooth, a highly recommended breakfast joint that is an old service garage! Their menu is a bit different with odd ingredients, but if you’re a foodie like me you’ll LOVE it. My poor hubby however did not. I felt so bad because I thought he would just get the cinnamon roll off the pastry list, but they made it with sourdough and coconut on top. He doesn’t like either of those things! So after I ordered my delicious brunch (I forget the name and their menu changes. It was a melt with egg, ricotta, honey on sourdough – AHHHMAZING! And my drink was a lavender coffee I’ve always wanted to try!), we left and stopped at a Panera for him. But seriously you guys, if you are ever in Indianapolis you have to try it at least once!!

We then went to pick up our girls who we were itching to see. It’s nice to get away for a night, but we really do miss them. We felt refreshed from the quality time spent with just the two of us! We loved it!

Some other things to do in Indy:

Spa in the City

And this website is great for recommendations of activities and restaurants!

My Honest Review of Date Night In Box: Painted With Love

Hi y’all. I’m Charley! I simply love life and the people in mine! This blog is a way to share my ideas on building stronger relationships and making the most of life! 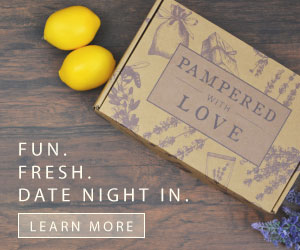